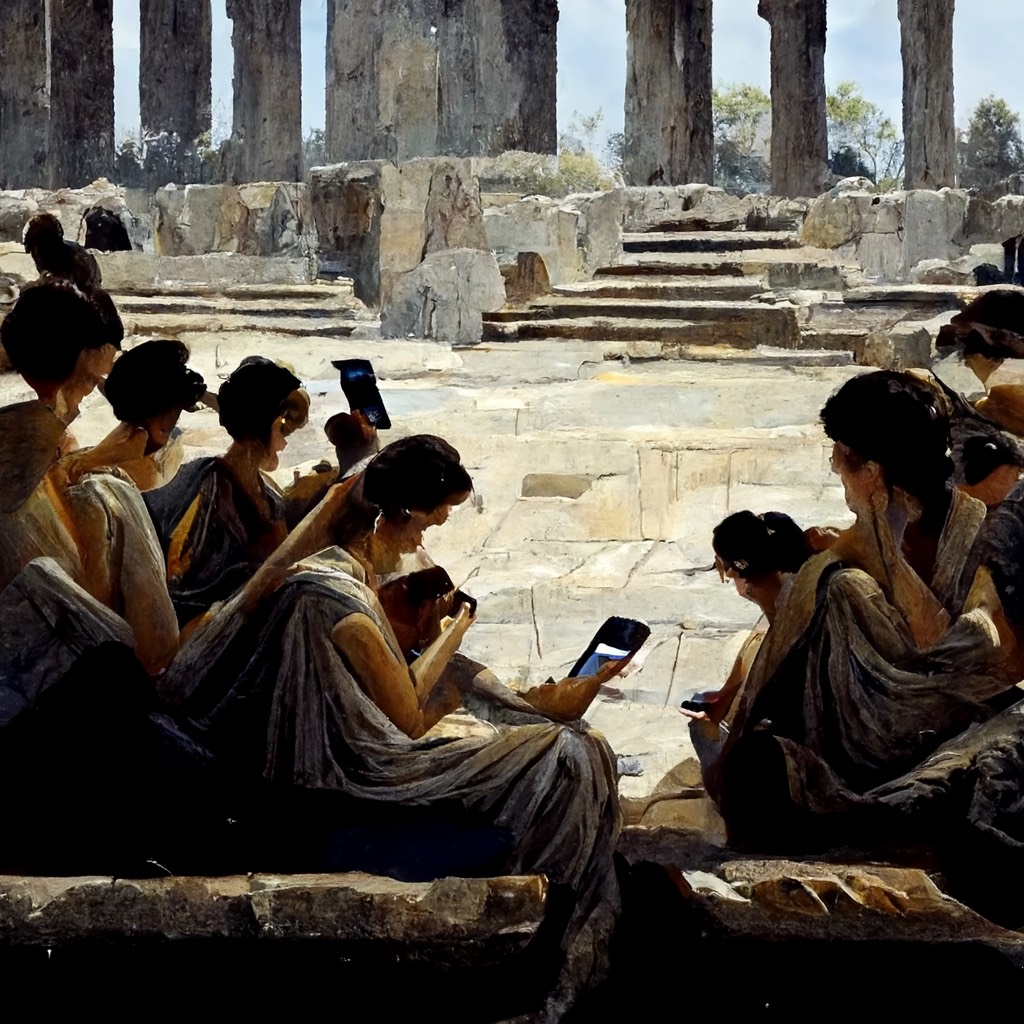 Humans did not always wish to progress. Unlike the present day, where our lives are consumed by thoughts and decisions made for a coming future, life in antiquity was entirely free from the conception of a future as such.

The notion of humanity evolving or mutating into an improved, elevated form was nonsense and unthinkable. For the Greeks, the following day was always the same as the present day, which itself was no better than the day preceding it.

“The Classical culture possessed no memory, no organ of history in this special sense. The memory of the Classical man … is something different, since past and future, as arraying perspectives in the working consciousness are absent and the “pure present,” fills that life with an intensity that to us is perfectly unknown,” writes Oswald Spengler in The Decline of the West.

“To the Greeks, for example, historical events and destinies were certainly not simply meaningless — they were full of import and sense, but they were not meaningful in the sense of being directed toward an ultimate end in a transcendent purpose that comprehends the whole course of events,” writes Karl Löwith in Meaning and History.

The classical “pure present” of the ancients predicated a negation of time and direction. The Greeks had no use for functions or dynamics. Instead, their experience of the world relied on definite magnitudes and statics. Their system of mathematics, encapsulated by Euclidean geometry, arose out of a completely alien world-picture relative to our contemporary system of mathematics, expressed in calculus, or the infinite and imperceptible distances conveyed by the Cartesian plane.

The Romans, with their expansionary, “unspiritual, unphilosophical” attitude, “aiming relentlessly at tangible successes,” marked a stark transition away from the ancient Greek’s spiritual concern with the pure present, and according to Spengler, marked the conclusion of the classical period. The Roman emphasis on intellect and pragmatism over culture marked the death of the classical soul.

The conception of money, “as an inorganic and abstract magnitude, entirely disconnected from the notion of the fruitful earth and the primitive values,” is an idea attributable to the Romans. Money as a salient metric on which one could measure the quality of life took root here. “It is possible to understand the Greeks without mentioning their economic relations; the Romans, on the other hand, can only be understood through these,” Spengler writes.

It was this legacy of economic thinking, fused with the increasingly popular influence of Christianity, which lay the groundwork for a new kind of soul, to be born among the ashes of the fallen Roman Empire. The disintegration of Rome proved fertile ground for the spread of Christianity. “Men learn through suffering, and whom the Lord loveth he chasteneth. Thus Christianity was born in the death throes of a collapsing Hellenic society, which served as a good handmaid to the Christian religion,” writes Löwith.

“To the Jews and Christians … history was primarily a history of salvation and, as such, the proper concern of prophets, preachers and teachers. The very existence of a philosophy of history and its quest for a meaning is due to the history of salvation; it emerged from the faith in an ultimate purpose,” he goes on.

The influence of this Christian metaphysic injected history with the power of a divine will, guiding the course of mankind in a particular, purposeful direction. History, therefore, became the lens through which the will of God, if studied carefully, might become legible.

With the onset of the Enlightenment, however, and newly unearthed frontiers of knowledge, Western man was overtaken with aspirations for the potential of the human intellect. The Christian scheme of a historical direction channeled toward a particular purpose was secularized. It was no longer the will of God steering the path of history, but human reason.

The essence of this secularized Christian metaphysic was best encapsulated in Goethe’s notion of the Faustian man. The story of Faust, of course, is a morality tale of a doctor of philosophy who bargains away his chance for salvation in exchange for earthly power, making the first and most famous ‘deal with the Devil.’

The hubris and ambition of Dr. Faust was analogous to the hubris and ambition of the man of Enlightenment. “[Man] meant, not merely to plunder [Nature] of her materials, but to enslave and harness her very forces so as to multiply his own strength. This monstrous and unparalleled idea is as old as the Faustian Culture itself. Already the steam engine, the steamship, and the air machine are in the thoughts of Roger Bacon and Albertus Magnus. … Many a monk busied himself in his cell with the idea of Perpetual Motion. This last idea never thereafter let go its hold on us, for success would mean the final victory over ‘God or Nature.’ …. To build a world oneself, to be oneself God — that is the Faustian inventor’s dream, and from it has sprung all our designing and redesigning of machines to approximate as nearly as possible to the unattainable limit of perpetual motion,” wrote Spengler.

The End of Progress

What has mankind received in exchange for its risky, Faustian bargain? We live in an era marked by profound discontent at the failures of the Enlightenment, irreversible environmental damage caused by industrial society, and a rampant spiritual emptiness in an existence mediated by cold, unfeeling, utilitarian reasoning. The world increasingly wants an escape out of its deal with the Devil. Though what kind of a bargain or ‘deal’ should take its place is still very unclear.

Time is still moving forward, and yet our salvation has seemingly been delayed given that our promised continued economic and scientific progress has stopped.

The meaning of this new reality, and what it portends of the world to come, is a mystery to us. Spengler did not know what would follow a world where the Faustian spirit exhausted itself. Today, there are only competing views about the direction humanity ought to take.

The question of history’s course along with its ultimate meaning, has once again become the crucial axis of debate. The role of the individual in the unfolding of such a grand narrative, is similarly open for re-interpretation. Given that staying in the same place is so universally undesirable, it seems there are only two contending solutions to this contemporary dilemma — walk back the Faustian philosophy and resurrect a more ancient way of being, or push forward into the future, re-invest in the human intellect, and mine the frontiers of knowledge to find paths out of our present material and spiritual stagnation.

Contenders of the first approach are intellectual descendants of the critiques raised by Heidegger who lamented the rise of an instrumentalist ontology brought about by secular, industrial society. A world where everything could be decomposed into inputs whose purpose was determined by the function they fulfilled within a larger economic or historical process was a cruel and brutal one, incompatible with the continued flourishing of humanity-as-such.

However, Heidegger was never clear on what such a reversal in direction could actually look like — and besides, this kind of romantic nostalgia has rarely ever borne fruit. There are virtually no examples of humanity ever successfully re-adapting to bygone modes of living. Time machines remain paradoxical and confined to the realm of imagination. Furthermore, it’s entirely unclear whether the material comforts of our world could be sustained in a system other than the one we have now. Our uncomfortable realization is that we are chained to our Faustian bargain. We just have to figure out how to live with it.

Among those urging a re-invigorated path onward, two positions are becoming clear. Secular thinkers like Tyler Cowen believe that a renewed attention to progress should be re-affirmed as a moral imperative for our times. A retrospective on the course of history shows that economic growth can compound infinitely into the future. On a purely utilitarian basis, restricting any amount of growth today taxes the opportunities and comforts available to future generations. However romantic moving away from the linear narrative of progress might seem, doing so is ultimately selfish and a waste.

Peter Thiel, who likewise wishes to accelerate scientific and real economic progress, believes we must re-inject the notion of a providential will into the course of this type of progress. It will be important to read within further advances in science and technology the workings of a divine will. And if this might not be convincing enough for some, then the argument that continued material progress is our only way out of a zero-sum world, which inevitably will plunge us into a Hobbesian or Malthusian trap, ought to seal the deal.

Progress via Technology, not History

For centuries, the assessment of humanity’s direction has been studied through the lens of history. Historical events have been conceived of as the agents through which the will of reason or the divine make their mark. However, as it becomes increasingly clear that outside of some cataclysm, our world is inextricably chained to the path of industrialization and technicization we have ventured upon, the power of historical events to sway our course is waning. Elections and political events are no longer vessels through which ideas take hold. Immensely more influential are the designs of the technologies that govern the constraints and comforts of our lives.

It is time to reframe our analysis of progress and view it not through the lens of history and historical events, but through a philosophy of the technologies which we develop, adopt and integrate into our daily lives.

As humanity deliberates on the direction it ought to steer itself, it should look increasingly on the canvas of our technologies as the vehicle through which these changes should be implemented.

Elon writes that a new philosophy of the future is needed. To this, I would add, a more informed and enlightened philosophy of technology must take root too.

I would like to sincerely thank Santi Ruiz, Omar Rizwan, Cristobal Sciutto and Keegan McNamara for discussing these subjects with me at length and inspiring the writing of this post.